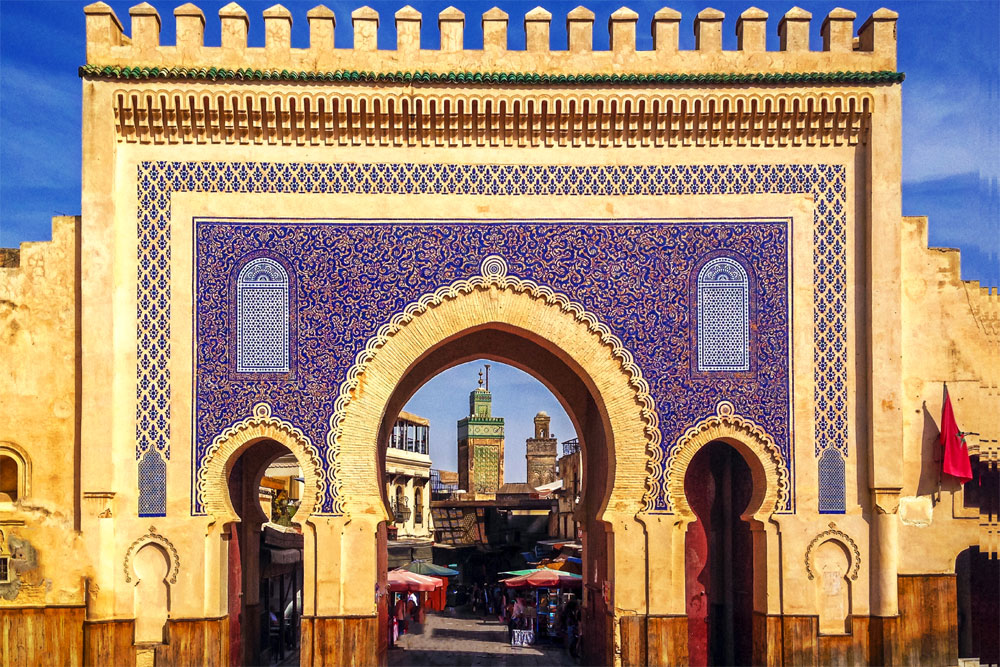 A mixture of culture, architecture and religion.

Tour through Fez with an English-speaking guide that will meet you with an exciting introduction to the Moroccan history and culture by driving you to the imperial city of Meknes, the holy town of Moulay Idriss and the Roman site of Volubilis.

Meknes is a medieval city rebuilt by the king Moulay Ismail in the 17th century as the capital of his kingdom. Enjoy the culture and cuisine with a lunch in an old Riad of Meknes before you head to the mountain of Zerhous to visit Moulay Idriss. Tour the medieval village and then head to Volubilis to explore the Roman part of the Moroccan history. Built 2000 years ago, Volubilis was the capital of Morocco at the time when it was a roman province. When traveling back to Fez enjoy scenic views of the countryside while passing through Zgouta.

Other tours of Fez include Fez El Bali (Old Fez) built in the 9th century, the Medersas (Koranic schools) where you will admire the beauty of the Moorish architecture, the Karaouine University which is the oldest in the world and the colorful souks of the Medina, and Fez El Jedid (New Fez) built by the Merinid dynasty in the 14th century and home to the Royal Palace and the Mellah, the medieval Jewish quarter. Your tours will be enhanced from its already culture filled experience with dinner with a local family in the old Medina.

Arrival at Fez airport.
Meet and greet by our representative and transfer to your Riad in the old city.

Check in and overnight at the Riad.

Morning: English-speaking guide will meet you for an exciting introduction to the Moroccan history and culture. Drive through the imperial city of Meknes, the holy town of Moulay Idriss and the Roman site of Volubilis.

Late Afternoon: Drive back to Fez via the pass of Zgouta through a different scenic countryside.

Dinner with a local family in the old Medina.

After breakfast, transfer with assistance to Fez airport for your flight back to the USA.

Land cost per person on twin sharing basis.
Please call us for a customized quote.

Travel Protection is offered by us and is an additional cost.

Nestled at the end of a quiet street, near the heart of the ancient labyrinth of the medina of Fez, the Algila Fez offers a charming base of exploring the souks and monuments of the loveliest of Morocco’s imperial cities. The hotel is comprised of three inter-connected 18th century residences, each an architectural gem in its own right, offering modern comforts in a traditional setting.

The hotel’s five suites and seven guests rooms are arrayed around three separate courtyards fitted with fountains, palm trees and sitting areas. This unique configuration lends itself to individual travelers and couples as well as to families and small groups, as parties requiring four or more rooms can reserve a section of the building for their private use. Delightful details abound, including a rooftop terrace with marvelous views over the medina.

Restored to its original glory, Riad Fez – Relais & Chateaux is located in the heart of the ancient city of Fez. It has succeeded in combing refinement with inspiration and invites you to relax and enjoy your stay in a serene atmosphere with decor reminiscent of Arabian Nights. Read Fez provides guests with the opportunity to travel back in time and enjoy the splendor and authenticity of the lifestyle of Fassi nobility. The prestigious history and refined civilization of this imperial city are reflected in the Spanish Moorish architecture and attention to detail seen in the decor.

The rooms offer an outstanding combination of modern and traditional decoration, to include:

This fourteen bedroomed opulent Riad provides refined dining and spacious accommodation. With a salon and library, a rooftop bar, extensive terraces, a traditional hammam and spa, impeccable service and all of this close to the Golden Triangle in the ancient medina in Fez.